Well, the launch of GPT 3 led to real buzz. Especially folks on LinkedIn have been going Gaga over the same. So let’s find out, what exactly ChatGPT is, and How can you use it for your benefit (without sacrificing on the quality)?

ChatGPT is an AI language model developed by OpenAI that allows users, that is us, to communicate with it in a chat-like interface.

It is based on the original GPT (Generative Pretrained Transformer) model, which was trained on a large dataset of internet text and is able to generate human-like text.

The ChatGPT model has been specifically designed to improve upon the original GPT model’s ability to understand and respond to conversational prompts. It can generate responses to questions, engage in dialogue, and even complete tasks such as translation or summarization.

How to Use ChatGPT?

All you need is a device with an internet connection and access to the OpenAI API.

Step 1: Enter a prompt or question into the chat interface.

Make sure you input enough information and details regarding the tone of voice and what you want from the AI for better results. 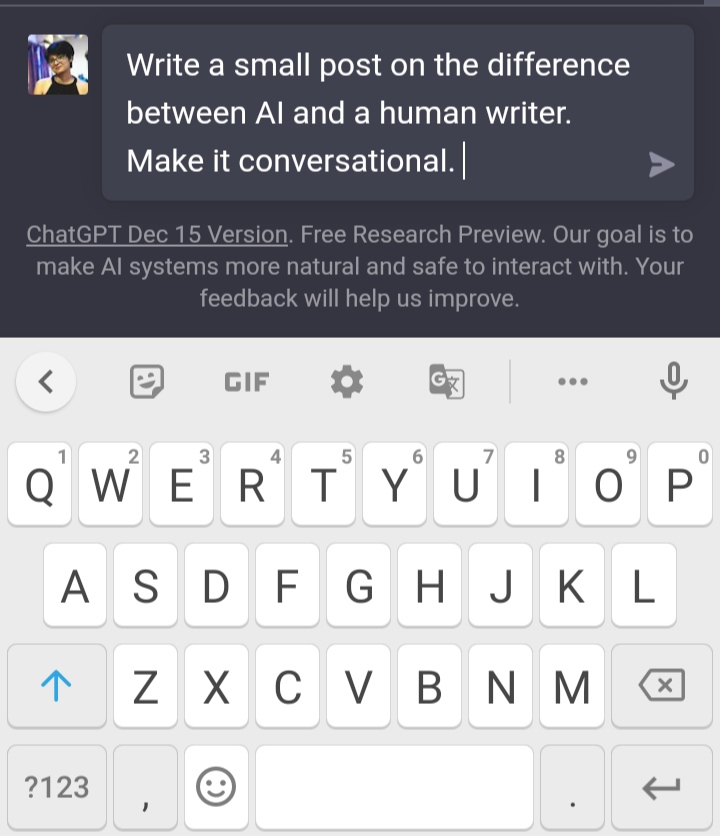 Step 2: ChatGPT will generate a response based on its understanding of the prompt and its knowledge of the world.

Below is what it wrote as a response to the above prompt “Write a small post on the difference between AI and a human writer. Make it conversational.” 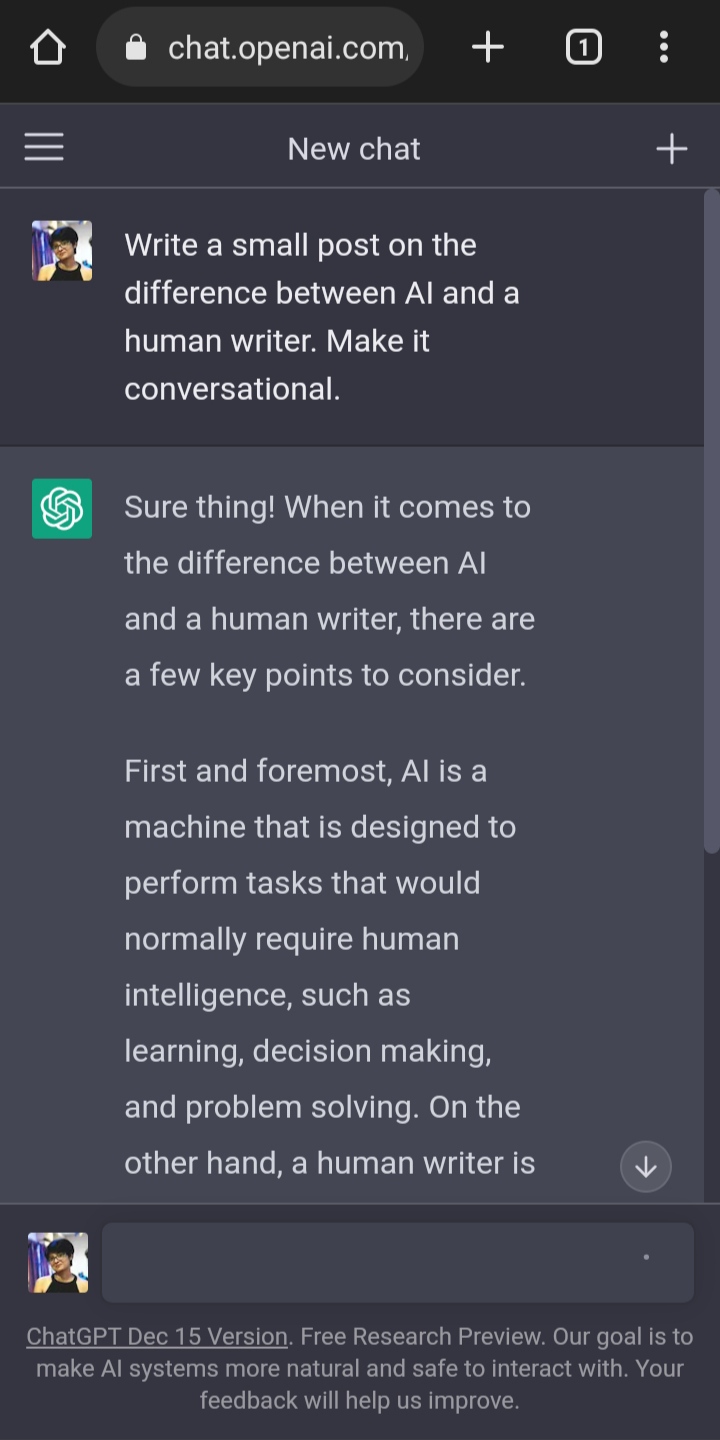 Remember, ChatGPT’s knowledge of the world comes from data that it has read previously. So do not expect it to provide you with fresh or updated information since it cannot crawl the internet.

One of the main benefits of ChatGPT is its ability to generate text that is almost indistinguishable from text written by a human. Read *almost*.

This makes it a powerful tool for tasks such as content creation or customer service.

You can now create more content in a very minimal amount of time, or in a few seconds.

However, there are also some limitations to using ChatGPT. For example, it may not always understand the context of a conversation or may generate responses that are inappropriate or unrelated to the prompt.

As I said before, it is important to note that ChatGPT is not able to browse the internet or access new information, so it is limited to the knowledge it was trained on.

And now coming to the burning topic of the year.

Well for that I let the AI speak for itself. Let’s see what it has to say about that – 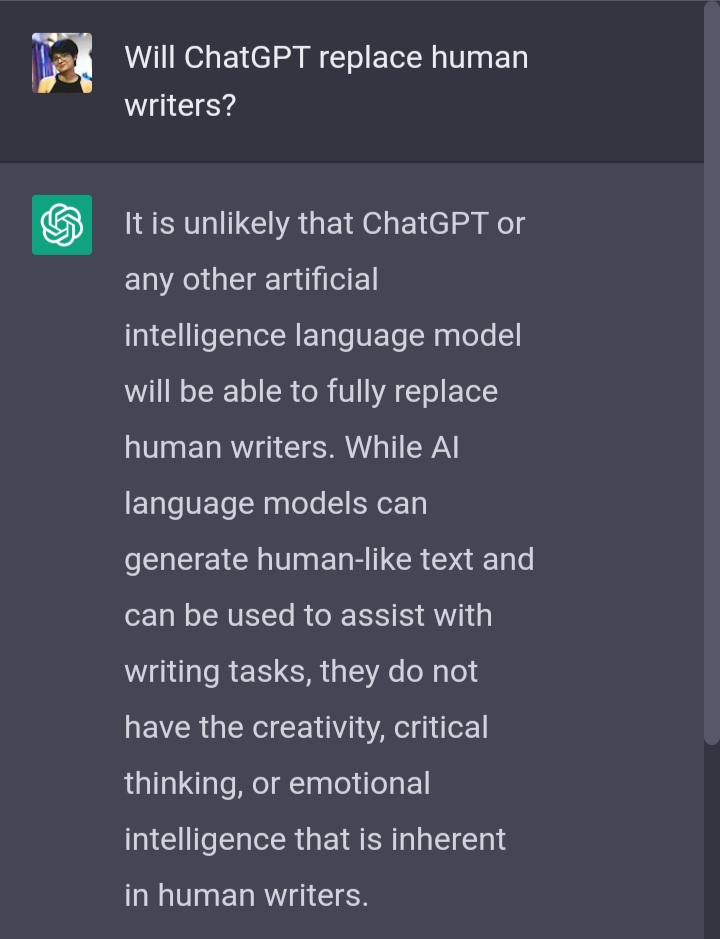 Here’s what I think of this particular situation –

ChatGPT is an immensely powerful tool and the content that is produced is high quality and reaches to zero errors. And in the future I believe the more data it is fed, the more creative and responsive it’ll become.

So on that front, I do believe it will give all creative professionals a tough competition.

But ChatGPT does not and will not have a perspective. It will not have a thought process; it does not have its own insights of working on a project or something which can make that particular piece of work stand out from the others.

As it itself said, I believe it’ll be an amazing supplement for creators (who create good work) and help them in the process. But it has a pretty high chance of replacing mediocre creators who do their job with no perspective or thoughtfulness. Because the job of getting content from others’ websites and tweaking it as your own, can be done by the AI a lot better than us humans!

In conclusion, this is a revolutionary tool that will change the way we work and create content specifically. Apart from all its benefits we also need to keep in mind its limitations as an Artificial Intelligence Tool. So what are your thoughts on ChatGPT?

Tags: How to Use ChatGPT, What is ChatGPT
Close Menu